The US decision: a flagrant provocation against the Palestinian people 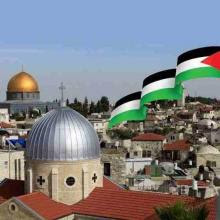 AKEL denounces the murderous violence of the Israeli forces who are firing indiscriminately and killing dozens of civilian Palestinian protesters. The Palestinians are demonstrating on the occasion of the 70th anniversary of their uprooting, but also against the US decision to transfer their embassy to Jerusalem. Today alone, the number of Palestinians murdered so far has reached 41 and the injured 2,000.
The US decision to transfer their embassy, ​​and in doing so recognizing Jerusalem as the capital of Israel, represents yet another blatant provocation against the Palestinian people. It constitutes a flagrant violation of International Law and the relevant Resolutions and Decisions of the General Assembly and Security Council of the United Nations, which consider as null and void “all measures and actions that Israel has taken as an occupying power and that have altered or are attempting to change the character and status of Jerusalem.”
Trump’s administration, basing itself on the US’ long-standing policy in the Middle East, is proceeding to take even more provocative and aggressive actions both with regards their Embassy in Israel, as well as with the unilateral withdrawal of the US from the agreement on Iran’s nuclear program. Tramp has revealed the true face of American imperialism, which for decades – for the sake of its geopolitical designs and the profits of the arms industries – has turned the Middle East into a region of ​​endless bloodshed and devastation.
AKEL expresses its unwavering solidarity with the struggling Palestinian people who are militantly resisting the new fait accomplis against them. However, the peoples of the world know that the Palestinian people has not surrendered or will surrender neither to the violence of the occupying power, nor of its allies until the day of the declaration of an independent Palestinian state on the 1967 borders and with East Jerusalem as its capital.
Posted by Party of Communists USA at 7:18 AM No comments:

Demonstration in Solidarity With Palestine

PAME expressed its opposition to the recognition of Jerusalem as capital of Israel by the USA and condemned the new massacre of Palestinians by the Israeli army with a protest on Monday, May 14 at the Embassy of Israel in Athens.

PAME stated:
“We condemn the violence and repression with more than 50 Palestinian fighters murdered till now. We condemn the imprisonments, the unacceptable wall, the Israeli settlements, the attempt to equate the "murderer" with the "victim". It is very recent, the European Union's despicable resolution, which basically put the blame to the Palestinians for forcing the Israelis to murder them!

We denounce the political - economic and military cooperation of Greece with Israel, which is constantly upgrading. Those who shoot Palestinian fighters on their unacceptable wall are themselves co-trained with the Greek Armed Forces!

The responsibilities of the SYRIZA - ANEL Government are criminal. On the one hand, they share words of sympathy for the Palestinian people, while at the same time they support American imperialism and the murderer state of Israel.

We demand:
 Shut down all the foreign Military Bases of Death. Return now all Greek ships, airplanes, military missions across the borders.
 Now NATO to leave the Aegean. No expenditure on NATO armaments.
 We strengthen solidarity with the people of Palestine and Syria.
 The Greek Government to implement the December 2015 decision of the Greek Parliament and to proceed immediately to the recognition of the Palestinian State.
Photos:
https://plus.google.com/photos/111424066969409429174/album/6555692560738480753?authkey=CMmqydzB_pyBcg