Portuguese CP, Concerning the recent Trump Administration decisions, on the 74th anniversary of the bombing of Hiroshima and Nagasaki 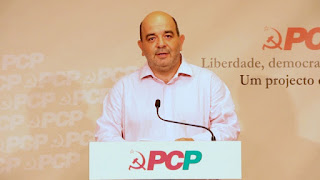 Statement by Angelo Alves, member of the Political Bureau of the Central Committee of PCP
Concerning the recent Trump Administration decisions, on the 74th anniversary of the bombing of Hiroshima and Nagasaki
August 6th and 9th mark the 74th anniversary of the US atomic bombing of the Japanese cities of Hiroshima and Nagasaki, which provoked death, irreparable diseases and the most horrific suffering of hundreds of thousands of human beings. By marking this date, PCP pays tribute to the victims of this monstrous imperialist crime that cannot be forgotten.
1 – After 74 years, preserving the memory and defending the truth about the nuclear holocaust is the duty of all forces of peace and progress. Also imperative, is denouncing and repudiating the attempts to rewrite the history of a crime that merely sought to affirm the military might of the US, and dedicating forces towards the struggle, so that Humanity may never experience the terror of nuclear weapons —mission, which in the present international context of great instability and insecurity and violent imperialist offensive acquires an even greater importance, topicality and even urgency.
2 – The international situation proves that the most reactionary and aggressive imperialist sectors increasingly invest in militarism, fascism and war as an “exit” for the incurable contradictions of the capitalist system.
The world, in particular the lovers of Peace, can only look with deep concern at the great dangers of the US Administration to tear the Intermediate-range Nuclear Forces Treaty (INF) —one of the fundamental nuclear weapons treaties between the two countries responsible for 94% of the world’s nuclear arsenal: the US and the Russian Federation— as well as this Administration’s indication it plans to abandon the Strategic Arms Reduction Treaty (New START) in 2021.
These decisions largely seek the development and territorial expansion of the nuclear arsenals of the US and the World, namely in Eastern Europe and Far East, and constitute genuine attacks upon peace and international security, bringing to the forefront the danger of a new nuclear catastrophe that can endanger all of Humanity.
3 – The main imperialist powers —in particular the US and its NATO allies, responsible for the overwhelming majority of global military spending and owners of the majority of the 16 thousand nuclear warheads in the World— are invested in an even greater military reinforcement of their foreign policies. They pursue increasingly dangerous acts of open destabilization and interference, develop lines of confrontation with large countries, such as the Russian Federation and the People’s Republic of China, undermine International Law, and increasingly resort to nuclear blackmail.
The accumulation of points of tension in several regions of the globe, in particular the Middle East —where the US’s abandonment of the 5+1 Nuclear Deal and consequent strategy of provoking Iran entails immense dangers— and Latin America, are the result of a deliberate option of confrontation, which associated with the arms race and the development of new and more powerful weapons of mass destruction, can have dramatic consequences for the World.
4 – The only form of avoiding the repetition of catastrophes such as Hiroshima and Nagasaki is intensifying the struggle and political action against the interferences and aggressions of imperialism, and prioritizing disarmament, beginning with nuclear disarmament, and the defense of peaceful conflict resolution within a framework of international dialogue, respecting the equality and sovereignty of nations and the rights of peoples.
At a time when warmongering rhetoric of the main imperialist powers is accompanied by the promotion of populism and openly reactionary and fascist ideologies, where new lies and propaganda are unleashed to justify militarist, securitarian and aggressive moves, the peoples and Governments should ponder the lessons of Hiroshima and Nagasaki, two crimes sustained by maneuvers of propaganda and disinformation, now re-edited to justify new and more powerful weapons, operations of interference and a return to the nuclear option, as clearly stated in the military doctrines of the US, NATO and European powers, such as France or the United Kingdom.
5 – Respecting the Constitution of the Republic, the position of the Portuguese State should not be one of submission to imperialism and its strategy of domination, confrontation and war, but a patriotic foreign policy that affirms sovereignty and national independence, that strives for an end to the arms race, for disarmament —firstly, nuclear disarmament— cooperation, peace and friendship among peoples.
In this contact, PCP reiterates its support for the Treaty for the Prohibition of Nuclear Weapons that prohibits “developing, testing, producing, manufacturing, acquiring, possessing, or stockpiling nuclear weapons or other nuclear explosive devices”, and that in the next legislature it will present a Draft Resolution to recommend its ratification, which was voted down by the Socialist Party (PS), Socialist Democrat Party (PSD) and Popular Party (CDS-PP), last July 5th.
6 – By alerting to the dangers of the present international situation, PCP simultaneously affirms its confidence that the struggle by the forces of progress and peace in the World can defeat the imperialism’s policies of war, aggression and exploitation. A nuclear war and tragedy isn’t inevitable. The strengthening of the forces, like PCP, which have a vast heritage in the defense of peace and against militarism is the best way of opening the path towards peace, dialogue, cooperation and progress, and the respect for the rights of peoples, as enshrined in the United Nations Charter.
http://www.pcp.pt/en/concerning-recent-trump-administration-decisions-74th-anniversary-bombing-hiroshima-and-nagasaki

Posted by Party of Communists USA at 7:36 AM