Israel Threatens to Use Nuclear Weapons to ‘Wipe Out’ Its Enemies 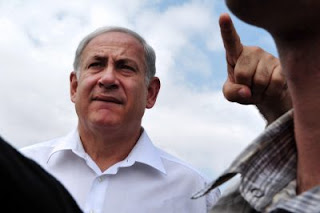 Standing next to a secretive Israeli atomic reactor earlier in the week, Prime Minister Benjamin Netanyahu threatened to “wipe out” his enemies. In a speech that many will see as the Jewish state breaking its long silence over the possession of nuclear weapons, the Likud leader warned that it has the means to destroy its enemies.

“Those who threaten to wipe us out put themselves in a similar danger, and in any event will not achieve their goal,” he said on Wednesday during a ceremony to rename the complex, near the desert town of Dimona. The site has long been suspected to be the location where Israel has been developing nuclear weapons.

Iran hit back by describing Netanyahu as a “warmonger”.  The threat “atomic annihilation” against the Islamic Republic was denounced as “beyond shameless in the gall”.

“Iran, a country without nuclear weapons, is threatened with atomic annihilation by a warmonger standing next to an actual nuclear weapons factory,” Foreign Minister Mohammad Javad Zarif wrote on his official Twitter account.

Javad Zarif ✔@JZarif
Iran, a country without nuclear weapons, is threatened with atomic annihilation by a warmonger standing next to an actual nuclear weapons factory. Beyond shameless in the gall.

1,874 people are talking about this
Zarif also commented on Israel’s nuclear programme saying:

“As the world marks Int’l Day against Nuclear Tests, let’s remember that only nuclear bombs in our region belong to Israel and the US; the former a habitual aggressor & the latter the sole user of nukes. Let’s also remember that Iran has called for Nuclear Weapon Free Zone since 1974.”

Israel has never acknowledged possessing nuclear weapons, instead maintaining a policy of “strategic ambiguity”. Foreign reports have put the size of Israel’s nuclear arsenal in the dozens to hundreds of weapons.
Earlier this month a science journal published by Princeton University’s Science and Global Security journal claimed that Israel conducted illegal nuclear test in contravention of international law.
Netanyahu’s remarks came as Israel lobbies world powers to follow the US in exiting a 2015 international deal with Iran that capped the Islamic Republic’s nuclear capabilities.
*
Note to readers: please click the share buttons above or below. Forward this article to your email lists. Crosspost on your blog site, internet forums. etc.


Featured image is from Shutterstock
Posted by Party of Communists USA at 8:12 AM