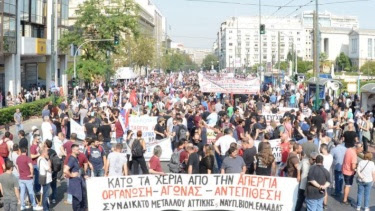 The GS of the CC of the KKE, Dimitris Koutsoumpas, who was present at the PAME strike rally at the Propylaea, stated: “The least thing that the government must do right this moment is to withdraw this shameful Bill, a bill that further destroys Collective Bargaining, which attempts to put a muzzle on the trade union movement, that strikes a blow at vital labor rights and gains won over many years.”

With a new nation-wide strike and rallies in dozens of cities on October 2nd, the mobilizations continued against the anti-people legislation being promoted by the ND government in the name of “development”. Sectoral Federations, Labor Centers and Trade Unions, continuing the 24/9 strike, confronted the government, employers and the undermining role of the GSEE leadership yet one more time.
In Athens a mass rally of the All-Workers Militant Front (PAME) took place, followed by a march to the Parliament, while similar strike rallies took place in more than 50 cities throughout Greece.
Addressing the rally, Giannis Tasioulas, President of the Federation of Construction Workers, revealed the anti-labor nature of the new legislation that stipulates an attack against fixed work hours, against minimum and mid-level wages, exemptions for those employers who do not deposit insurance contributions into the Funds, permanizing a bare minimum of salaries and wages, through the notorious “exceptions” concerning any Collective Bargaining Agreements that are signed, as well as a further attack against the unions and the right to strike.
Additionally, G. Tasioulas condemned the government's agreement with the USA and NATO, which was not made, as he stated, in the interests of the working people.
He expressed the solidarity of the trade unions with immigrants and refugees.
G. Tasioulas ended his speech as follows: “It's not coincidental that employers and the union mafia wake up and sleep with anti-communism in their mouths. Nor that the bourgeois parties lose any opportunity to spew the poison of anti-communism. Neither is it a coincidence that the EU resolutions that distort the History of the peoples, equating Nazism and fascism with communism, were co-signed by liberal, center, and fake left forces. This serves their interests. To attack the working class and the popular strata as a whole. Historical experience shows that anti-communism is the preparation by the forces of capital for an overall strike against the workers. This element must be seriously estimated by each and every one of us. We do not compromise. We do not lay down our weapons in battle. Through our struggle we will impose justice.”

https://youtu.be/hczOSbaJ8uM
Posted by Party of Communists USA at 10:50 PM