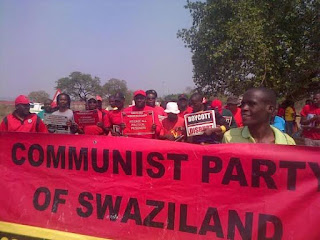 The Communist Party of Swaziland (CPS) stands with public sector workers of Swaziland in their strike action. The workers demand a 7.85 per cent cost of living adjustment. The violent reaction by the regime’s police last week, 25 September 2019, and today, 2 October 2019, is a sign that the Mswati regime is getting more desperate and will do anything to cling to power.
The workers’ protests are a total rejection of the tinkhundla government, which is the employer in this case. The protest over wages is at one and the same time a protest against tinkhundla exploitation. In Swaziland, state resources are not used for what they should be for; social development and economic stimulation. Instead, the money goes to fund the luxurious lifestyle of the monarchy and wasted in corruption. The tinkhundla autocracy has collapsed the economy in this way. Money for education and health are redirected to Mswati, his family and friends.
The Mswati regime wants to treat workers as part of its royal regiment. The regime wants workers to do nothing but bend over twice in implementing tinkhundla rule and ideology. The royal regiment system is a form of slavery practiced by the monarchy, supported by imperialist forces, SADC and African leaders along with other reactionary forces.
The police violence against workers is thus intended to defend tinkhundla dictatorship and its exploitation. Exploitation of human by human must come to an end. In the Swaziland situation, this begins by bringing an end to the Mswati autocracy.
The Communist Party of Swaziland calls upon the masses of our country to support the protests by joining the workers’ pickets and protests. International progressive forces, including our friends, must reject Mswati and his suppression of workers and their rights. The Communist Party of Swaziland also calls for solidarity messages and demonstrations.
Swaziland needs Democracy Now!
Issued by the Communist Party of Swaziland
Posted by Party of Communists USA at 10:45 PM