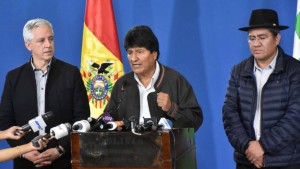 
AKEL condemns the new coup d’état underway in Latin America – this time in Bolivia – with the blessings of the US, as well as the direct intervention of the Organization of American States in the country’s internal affairs. The  conservative opposition and the far-right of he country, together with police and military divisions, are turning against the democratically-elected government of Evo Morales, who in the face of a wave of violence, kidnappings and looting that has been launched, has opted to resign in order to avoid further bloodshed.
Evo Morales is Bolivia’s first indigenous President and represents a symbol of the struggle of the indigenous peoples across the American continent. Since 2006, his government has implemented a policy of nationalizations in the economy to tackle extreme poverty, redistributed the land and implemented numerous demands from his country’s people, one of the poorest on the continent. That is precisely the reason why the US – which is demanding that it gains full control over Bolivia’s rich energy and natural resources – has from the very beginning sought to overthrow the government.
The coup d’état in Bolivia is a product of Trump’s aggression against the peoples of Latin America. Throughout the whole of Latin America, the confrontation between the governments and movements that express demands for social justice and national sovereignty on the one hand and the oligarchy and far-right forces that have the backing of the US on the other is intensifying. In Brazil and Chile, far-right governments have already shown to the whole world their brutal anti-social face.


AKEL expresses its solidarity with Evo Morales, the Communist Party of Bolivia (PCB), the Movement for Socialism–Political Instrument for the Sovereignty of the Peoples (MAS) and the people of Bolivia, as well as all with the struggling peoples of Latin America.
Posted by Party of Communists USA at 3:24 PM