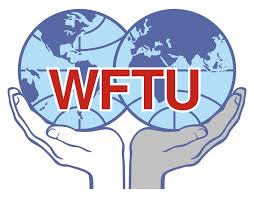 The US administration, represented by the head of its pyramid, presented by the US President Donald Trump with a hostile and provocative step has announced in public at a press conference with the Prime Minister of the Israeli entity, “Beniamin Netanyahu” that Jerusalem is the eternal capital of the Zionist entity and that the occupied Syrian Golan has become part of what is called the State of Israel, and that the Palestinians have to accept the fait accompli and to join the peace process in order to have a state recognized by the American administration that has no borders, but rather is based on separate and fragmented cantons. On the other hand, they will have investments that make their promised state a paradise on earth, otherwise they will face more and more isolation.
We at the World Federation of Trade Unions stress the following:
1- Jerusalem is the eternal capital of the State of Palestine.
2- The American administration should stop stoking hostility in the region by imposing a fait accompli policy, in contradiction to the United Nations resolutions that affirm the necessity of the Zionist entity withdrawing from all the Arab lands it occupied, otherwise what is the purpose of the United Nations and international law if each country violates it?
3- The right of return for the Palestinians is a sacred right that no one has the right to violate, and it is a right that does not lapse by default.
4- The Syrian Golan is Syrian occupied land, whose reality cannot be changed in any way.
5- The necessity of uniting Arab and international forces opposing the policies of domination and colonialism pursued by successive American administrations and the need for a global front to confront and expose these policies at all levels, and to organize protests in front of American embassies in the world.
6- The necessity to unify the Palestinian trade union forces at home and abroad, because what was leaked from the Deal of the Century has become a dangerous matter.
Long live the heroic struggle of the Palestinian people
Jerusalem and the Golan are Arab Lands
Long live the World Federation of Trade Unions
Posted by Party of Communists USA at 1:37 PM