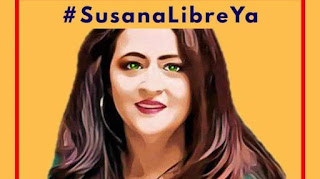 The Party of Communists of the United States of America (PCUSA) denounces the arbitrary arrest and detention of labor lawyer and activist Susan Prieto Terrazas by authorities in the Mexican state of Tamaulipas. The PCUSA demands her immediate release.

Susan Prieto Terrazas is a Mexican lawyer, with offices in Chihuahua and Tamaulipas, who has devoted her career to defending the interests of the workers in the Maquiladora factories of Northern Mexico. Maquilas are factories, mostly in Northern Mexico, that are controlled by foreign capital to take advantage of cheap labor, lax regulations, and tax breaks.

Susana Prieto Terrazas has, since obtaining her law degree, worked in courts and in the workers rights movement in the Northern states of Tamaulipas and Chihuahua. In 2028 and 2019 Susana was an important leader in a strike movement that won a 20% wage increase for workers in 48 export oriented factories in Matamoros, Mexico. It is not hard to imagine that this gain for the workers engendered much enmity towards Susana from people in power and from many corporate board rooms.

On June 8 ,2020 Susana was arrested by the Tamaulipas authorities for allegedly rioting and blocking the entrance to a building. All were activities related to a labor dispute. Any trade unionist, in any corner of the world, would recognize her arrest as retaliation for her labor activities. The motivation for her arrest is political and she remains a political prisoner.

The PCUSA calls upon the Mexican authorities, both state and federal, to ensure Ms. Prieto Terrazas release and to allow union activities in Northern Mexico to continue unhindered by threats of prosecution.

Posted by Party of Communists USA at 1:37 AM