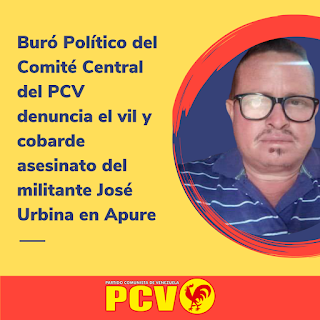 Caracas, 11-01-2022 (COMMUNICATION). In view of the vile and cowardly murder of our dear comrade José Urbina, social activist, popular communicator and leader of the Communist Party of Venezuela (PCV) in the Parish of Codazzi, Municipality of Pedro Camejo, Apure State, which occurred this Monday night, January 10, 2022, in his house located in Puerto Páez, we send to his relatives, friends and militants of the PCV in the region, on behalf of the Political Bureau of the CC-PCV, a fraternal and solidary embrace, together with our most heartfelt condolences.

The Political Bureau of the CC-PCV denounces this vile and cowardly assassination and demands from the Venezuelan authorities immediate and exhaustive investigations to identify the intellectual and material authors, as well as possible accomplices.

Comrade José Urbina had been developing a positive political and social activity in defense of the border communities in the town of Puerto Páez, which led him to have contradictions with officials of the State security forces who even threatened his physical integrity.

Comrade José Urbina always acted openly and transparently in the defense of the interests of the people, in the promotion of the policy of the PCV among the masses and courageously denounced the arbitrariness and abuses against the communities, regardless of their origin.

We demand justice for his vile murder!

THOSE WHO DIE FOR LIFE, CONTINUE TO LIVE IN THE STRUGGLES OF THE PEOPLE!

WE WILL CONTINUE FIGHTING!

For the Political Bureau of the Central Committee of the Communist Party of Venezuela (PCV), Oscar Figuera González, General Secretary of the CC-PCV.

Posted by Party of Communists USA at 11:26 AM