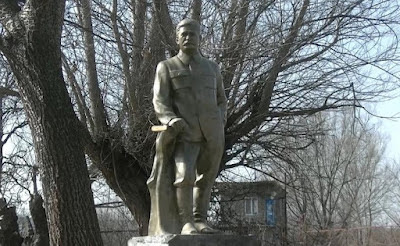 No matter how hard the anti-communist and anti-Soviet propaganda tries to slander him, the name and legacy of Joseph Stalin remains respected by the majority of people in the former USSR Republics. His native Georgia couldn't be an exception.

Recently, despite the objections of local authorities, residents in the Georgian village of Varani, in Gori municipality, erected a monument dedicated to the legendary Soviet leader.

Back in 2010, authorities dismantled Stalin's monument in Gori. Seven years later, in 2017, on the occasion of his 138th birthday, Georgian communists and workers installed a bust of "Generalissimo" in Gori's central square.

IN DEFENSE OF COMMUNISM ©

Posted by Party of Communists USA at 2:52 PM